What is so special about this address? It is a pretty ordinary residential road located at the western end of Chiswick, close to the bridge over the railway line linking Gunnersbury and Richmond. This inconspicuous address, however, houses not one but two buildings which contribute to the character and history of Chiswick. One is a recent addition and the other was built in the 19th century.

The first, distinguished by a bright blue, golden-star studded dome clearly visible from the A4/M4, is commonly known as “the Russian Church”. Its full formal name is The Cathedral of the Dormition of the Most Holy Mother of God and the Holy Royal Martyrs, reflecting the presence of a main church, on the ground floor and dedicated to the Virgin Mary, and a second church, or chapel, downstairs. The latter is dedicated to the last Imperial Russian emperor, Tsar Nicholai II and his family, who were executed by the Bolsheviks in 1918 and canonised by the Russian Orthodox Church Abroad in 1981.

The building is compact and well-proportioned, in the Pskov style, painted white and with a walk-way around it used for processions around the building on special occasions. To its right, there is the building now serving as Clergy House (Sandersons House; see below) and there is a parking area at both the north and south ends. A small, informal garden at the end of the plot completes the picture.

ROCOR (The Russian Orthodox Church Outside Russia) purchased the plot and its incumbent building in 1990. The foundation stone for the Cathedral was laid in 1997, and the formal opening took place two years later. The belfry was completed later, in 2013, and the full peal of nine bells was first heard at Easter that year. The bells were specially commissioned from Russia and were installed by one of their craftsmen.

Neighbours have been following the ongoing refurbishment around the Cathedral with interest. In 2016 the exterior was repainted. Until relatively recently, the property was surrounded by somewhat dilapidated wooden fencing. In 2016 this was taken down, and work began on putting in substantial concrete posts as part of a new fence. This work was eventually completed this year, although the surfaces are still rough concrete. New gates were fitted earlier this year, and, earlier this week, railings with a rolling, wave-topped shape were put in place between the concrete posts. The gates and the railings will eventually be painted black, with decorative motifs highlighted in gold. We look forward to seeing the end result in all its glory.

The building is attractive from whichever angle it is seen, but is, perhaps, particularly striking seen from the public footpath connecting Wellesley Road and Chiswick Village. On a sunny day, in the leafy season, the nine bells (all different sizes) can be seen offset against the white walls and backed by the blue dome. This image can be seen on the Cathedral’s web site (www.russianchurchlondon.org/en/), which also provides a link to images from the inside of the building. 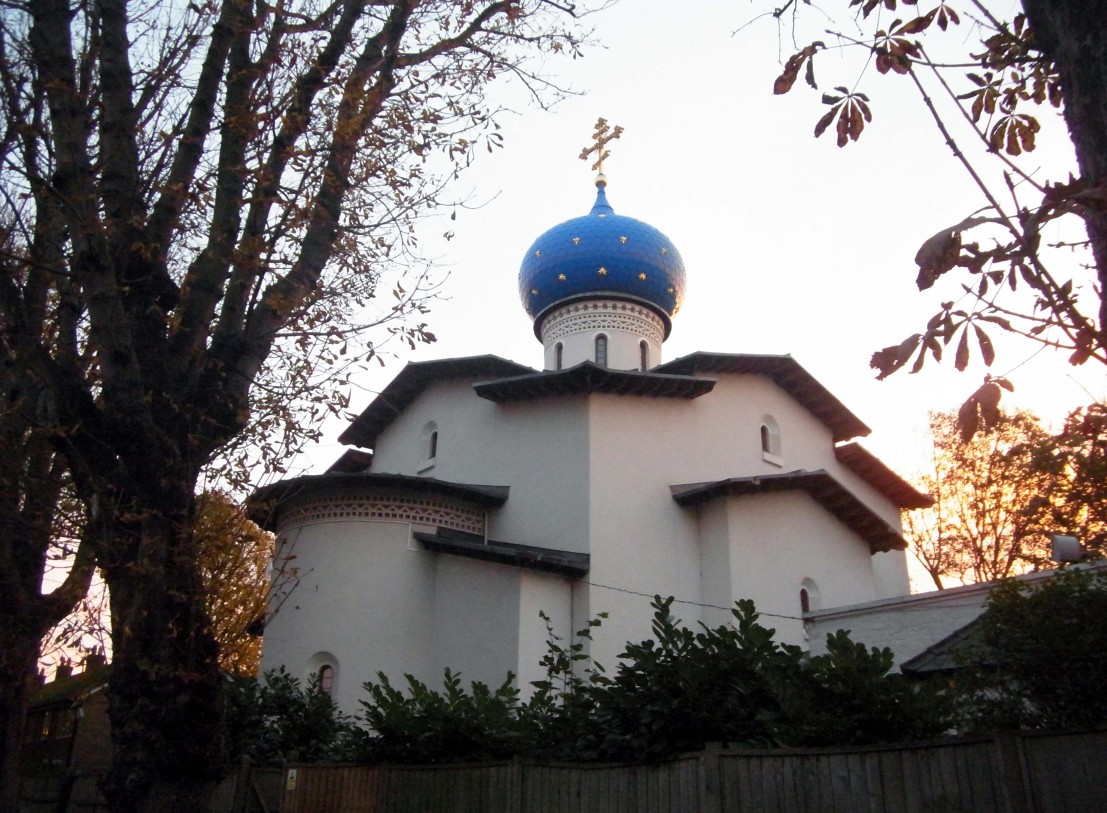 Photo of bells taken by Jon Perry in 2017 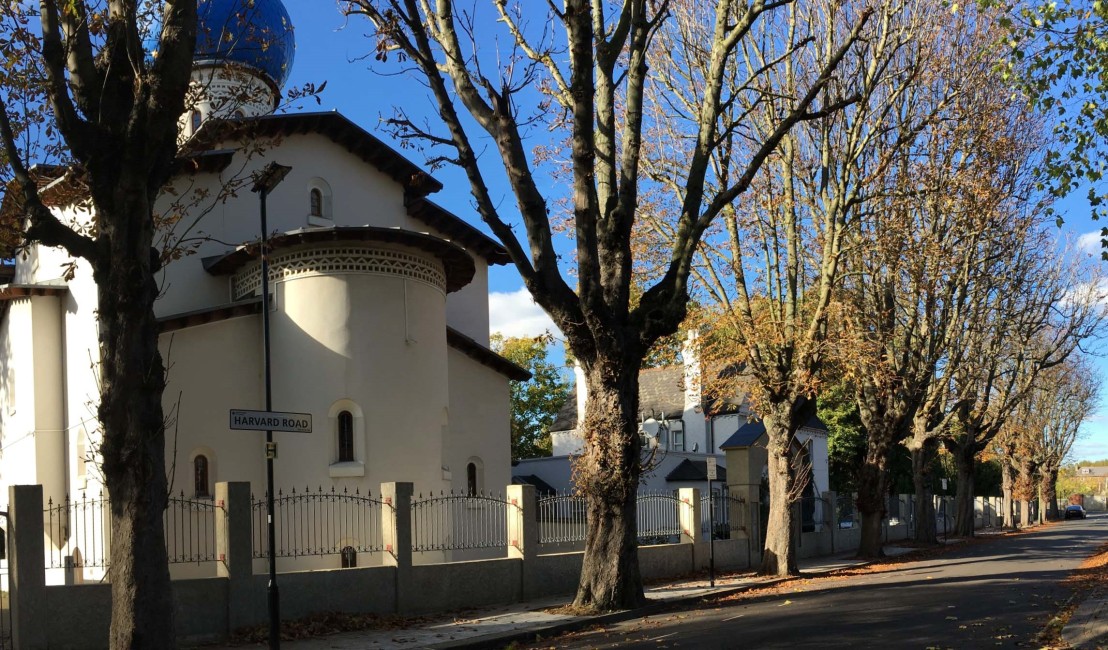 The second building at this address, briefly referred to above, has an interesting history, although rather less information about it is currently to hand. It is sometimes referred to as “Sanderson’s House”, and takes its name from the Sanderson family, of wallpaper fame. More specifically, it was the home of Harold Sanderson, one of three sons of Arthur Sanderson, who, following the death of their father in 1882 and together with his two brothers John and Arthur Bengough, carried on the running of the ever-expanding Sanderson wall-paper works. Harold, who at the time was only 18, took over the responsibility for production and the Chiswick factory.

Arthur Sanderson first came to Chiswick in 1860 and established a staining works for wall-paper. This was originally located to the South of Turnham Green but slowly expanded east-wards and into both sides of Barley Mow passage. The final addition, designed by Voysey and erected in 1902-1903, was a white-glazed brick building with dark blue trim on the north side of the passage. This, now converted to offices, still stands and is now a listed building, Grade II, and is called Voysey House.

In 1928 the main Devonshire Works was destroyed by fire. All that remains is the 1893 frontage. Recently, one of the lanes linking Barley Mow Passage and Chiswick High Road at the side of Voysey House has been named Sandersons Lane.

To return to the Harvard Road building, it seems that the Sanderson family home, in what is now Chiswick Library (donated to the community by the Sandersons in 1898), was becoming a little crowded, being home to some 16 people in 1891. Harold married in 1893 and went to live with his new bride in the (rented) house in Harvard Road, where they lived till 1904.

The building raises more question than can currently be answered: When was it first constructed, and for whom? Did Harold Sanderson actually purchase the property, or did someone else continue as owner? What happened to the building after the departure of the Sandersons? Was it sold, and if so, when and to whom? The building does not appear on an OS map from 1920, although a small structure is indicated slightly further south.

When ROCOR bought the property at 57 Harvard Road, the house entered a new phase of its life and became Clergy House. To meet the parish needs, a recent extension on the south side was constructed. This first served as a parish hall, and was then authorised to be used as a nursery five days a week. 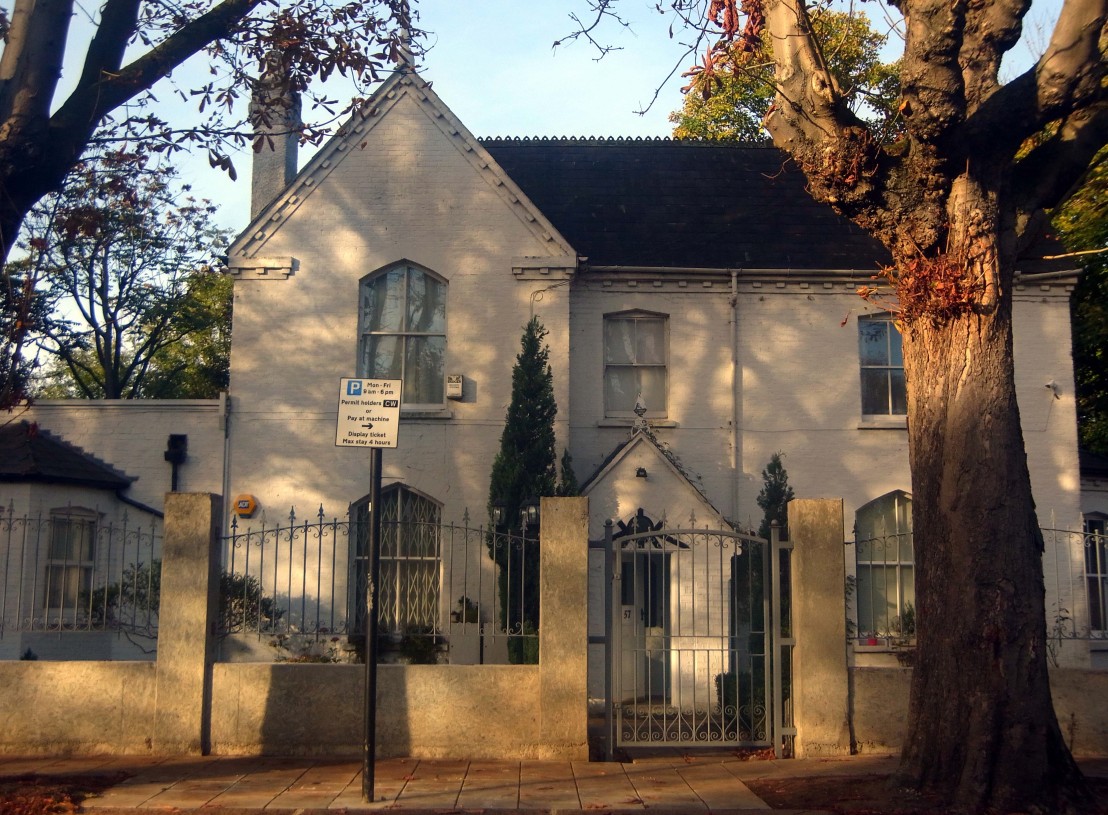